The Spirit of Albion: world premiere! 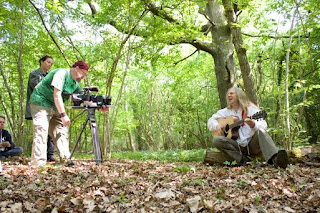 After much hard work the team behind The Spirit of Albion, a film based on the music of pagan musician Dave Smith (also known as Damh the Bard) is ready for its premiere in Sussex on Beltane Eve. Yes, the UK will be seeing this film well before any of us in the US, as it should be! But those of us who know and love Damh's music will be eagerly awaiting a chance to see it stateside!

For those able to attend, here are some details from the film's Facebook page:

We are delighted to announce that the World Premiere of the Egotrip Productions (in association with Banshee Productions) movie THE SPIRIT OF ALBION will take place on Monday 30th April at The Hawth Theatre Studio, Crawley, Sussex, RH10 6YZ.

This is your chance to come and see the film with the cast and crew as well as be treated to an exclusive live performance by the one and only DAMH the BARD himself before the film starts.
Numbers are strictly limited and will be released on a first come, first served basis. The timings are as follows:
Arrive from 7:00pm (bar open)
Doors open 7:30pm
Live concert by Damh the Bard - 7:45pm
Film starts 8:30pm
After the film, there will be a chance to mingle/buy DVDs (!)/have a drink.
The bar closes at 11pm.
Tickets are available Priced £15 from The Hawth Box Office on 01293 553636 or box.office@hawth.co.uk or tickets.hawth.co.uk.

There you have it: a movie AND a concert! Many congratulations to Damh, director/producer Gary Andrews, and the whole cast and crew that worked on this film.

The film's website has plenty of fascinating information and images, including a wonderful shooting diary. I've been a fan of Damh's music since first hearing him perform at an ancient stone circle (the Rollrights) near Banbury, UK, a few years ago, and was thrilled when he played a song called "The Spirit of Albion" since Albion is my magical name. I very much look forward to seeing The Spirit of Albion soon and plan to help support this effort by purchasing a DVD when the proper format becomes available. Do be sure to always try and support pagan artists, especially filmmakers, since film is the one medium where paganism is sadly underrepresented, or misrepresented. Many thanks and congratulations to the good folks behind this effort.
Posted by Peg at 4:41 AM