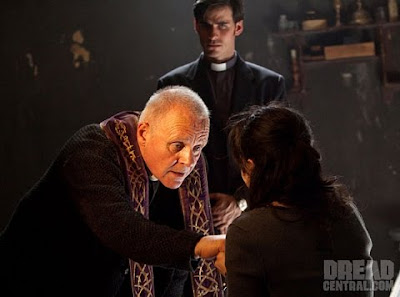 After The Last Exorcism drew a respectable number of theatre-goers and some decent box office earlier this year (not bad for a first-time filmmaker), it would seem exorcism is again a hot topic, and this time on a bigger budget. Sir Anthony Hopkins stars in The Rite, helmed by Swedish director Mikal Hafstrom, whose previous work includes Derailed, Evil and the paranormal triller 1408.

Hopkins plays an American priest who travels to Italy to study at a school for exorcists. The cast also includes veteran Irish actor Ciaran Hinds (seen earlier this year in the romantic ghost story The Eclipse with Aidan Quinn) and Rutger Hauer, perhaps best known as the platinum blond replicant in Bladerunner. Two trailers available here indicate what begins as an intriguing story "inspired by true events" (and quoting this recent New York Times article) turns into a bonafide horror film. What's most intriguing to me about The Rite is the suggestion that the Vatican's decision to engender a renewed interest in exorcism and demonic possession is a story that has been hushed up in the news media, and this film purports to tell the untold story. But to do so within the trappings of a horror film may tend to undermine the story's brevity, whether intentionally or not.

In a similar way, The Last Exorcism started out grounded in absolute realism (hand held cinema verite, fake documentary style) and ended up a horror film, which, while entertaining, didn't work for me. A fake documentary purporting to contain "found footage" can't (or shouldn't) employ eerie music or spooky camera angles, as that spirits it into another genre entirely.

But The Rite has no such conflicts of form: it's a big budget thriller with some ambitious things to say about the the possibility that the devil just might be real. This road has already been well trod, of course, particularly in 1973's The Exorcist. We'll see what new light (or darkness) will be shed with this one.