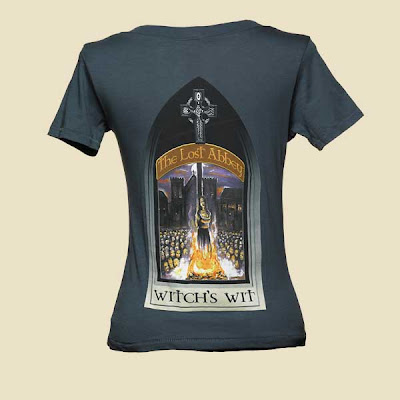 Perhaps you recall the Lost Abbey Brewery Brew-ha-ha? Maybe not. I'm not saying it was some earth-shattering event. But it did make the New York Times!

A group determined to continue pestering Lost Abbey until they change their "Witch's Wit" label to something less offensive formed on Facebook not long after the story started making the rounds on the pagan blogosphere.

I wonder if they'd heard the latest news?

The Lost Abbey Brewery posted today that they are discontinuing their "Saints and Sinners" club, a mail order venture that allowed them to sell beer directly to consumers. The club had been popular. But changes in state regulations have made it increasingly difficult for the brewery to continue offering the service. I do wonder if the indignant protestors had in mind when some of them encouraged "hexing" the brewery.

I joined the Facebook group and posted a few comments, but was very quickly blocked from expressing my opinion there. I should point out, I was never anything less than polite on that page (unlike the snark I unleash here sometimes, but hey, this is MY blog!), but was banned nonetheless. I guess a bit of healthy debate doesn't sit well with extremists.

Because, yes, I think it's going to the extreme to "boycott" a company (a small, family-owned company at that) you didn't ever buy anything from in the first place. A company you probably never were going to buy anything from, because, let's face it, you had never heard of them before, had you? And yet you put a good deal of energy into fantasizing that you could "hex" them and "bring down" their (small, independently-owned) company. Yes, hexing someone over a beer label. Way to embrace that "Harm none" principle.

I also think it's a waste of energy to protest something like this when there are dire social situations in the world that actually are in need of activists to promote awareness and raise funds. Some of those situations involve actual witch burnings and cases of injustice caused by satanic panic. But gosh, no, let's not help victims of genocide or those crippled by natural disasters when there's a logo design contest to be won!

Yes, let's use our time and talents making logos, Photoshopping the faces of the Lost Abbey Brewery owners into images that show them being burned, tied up, and tortured. That'll show 'em.

Image courtesy of Lost Abbey. You can buy this -shirt online.
Posted by Peg at 9:45 AM