And now the final installment of 2010's Best Films (of interest to like-minded pagan folks)!

This time we're looking at documentaries released in 2010. Given the nature of documentaries, some of these may have yet to make it to your local arthouse cinema, and some of them are not yet available on DVD. 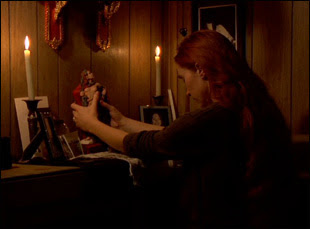 One film that has generated a fair amount of buzz in the pagan community, thanks to some excellent coverage on The Wild Hunt Blog by Jason Pitzl-Waters, is American Mystic by Alex Mar. The Wild Hunt has featured an interview with the director and coverage of the film's screening at this year's Pantheacon event in San Jose.

The film is one that does not offer any specific narrative point of view or narration by anyone except the three main subjects: Kubai, a Spiritualist-in-training from New York state; Chuck, a Lakota Sioux Sundancer, and Morpheus, a pagan priestess who lives on a sanctuary in progress in California. Following each subject through their everyday and extraordinary experiences, we hear how the three of them all came to their respective paths and their struggles and challenges along the way. The film seems to have three distinct tracks, but eventually seems to blend these three worlds together as the music and sound from one segment blend into the visuals from the next: a very haunting and evocative technique.

Perhaps most pagans would be interested in the segment on Morpheus Ravenna, a young redhead who lives at the Stone City Pagan Sanctuary with her artistic handyman husband. She is an initiate of Victor Anderson's Feri tradition and performs and teaches within the pagan community. By choosing to focus on relatively young subjects, Mar shows people who are not elders or trained teachers, but seekers who have found their path and continue their deeper engagement through practice. The traditions range from the psychism of the Spiritualists at Lily Dale in western New York, to the ancient tradition of sundancing practiced by Chuck and his community, to the ever-evolving pagan and Wiccan traditions of the California pagans. No doubt many pagan viewers will consider the pagan rituals portrayed to be different from their own, and some may disagree with Morpheus' views on witchcraft and its origins. But it's fascinating to be privy to another person's tradition and practices, to be able to compare it with our own and that of others; this is the first time such an intimate look at modern witchcraft has occurred in a documentary film to my knowledge, and that fact alone makes American Mystic a stunning achievement. 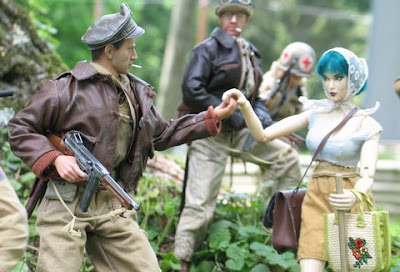 My second pick for documentary of interest to pagans is Marwencol, a beautiful and very moving intimate portrait of a man who lives in upstate New York. Directed by first-timer Jeff Malmberg (my interview with the director appears here and a longer review here) and several years in the making, this is the story of Mark Hogancamp, an artist who is beaten senseless outside a bar one night, and after being in a coma for more than a week, awakens with severe physical and emotional trauma, and very little memory of his previous life.

Mark works through his trauma and physical handicaps caused by the attack by building a miniature scale model village of WWII Belgium called "Marwencol." He uses Barbie and Ken dolls, scraps and detritus found in the trash, and supplies from the local hobby shop to craft his village (which includes soldiers, female bartenders, and a blue-haired witch named Deja Thoris). Mark's amateur (but very artful) photographs of his village catch the eye of some New York artists, and Jeff Malmberg suggests filming his process. The result is as creatively inspiring and stunningly beautiful as any film I can recall seeing in years: it is a triumph of the resilience of the human spirit, and the healing powers of art and friendship. You can see many stills from the film and follow the story of the characters on this website, maintained by the film director, producer and Mark. Marwencol will be released on DVD April 12, 2011. 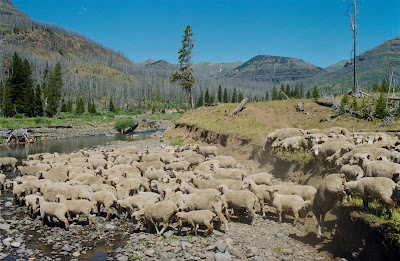 My third documentary pick is the very ambitious and impressive Sweetgrass, a gentle and unassuming film that is nevertheless an astounding feat of filmmaking. The film follows what is to be the last sheep drive through the Montana mountains, following the animals as they move from summer to winter pasture and back. It is a way of life that has all but disappeared in America, because so few of us eat wool or eat lamb (except me and you, right?), and it's obvious it's also a demanding and skilled occupation. The film took several years to make, and Ilsa Barbash and Lucien Castaing-Taylor, the husband and wife filmmaking team, experience some dramatic hardships as they followed the shepherds. I had the good fortune to interview the filmmakers for the Boston Phoenix and it also is reprinted on the film's website. The scope of the images and the simplicity of the action is mesmerizing, while at the same time evoking thoughts of the importance of animal husbandry and the traditional ways of living on the land that are becoming distant memories. If you're someone who believes our connection to the land is important and sacred, you need to see Sweetgrass.
Posted by Peg at 1:09 PM