The first part of this article featured some of the more popular films related to the occult and paganism. But often the most interesting films of interest to pagans and witches fall outside the realm of Hollywood and the big box office, in the world of documentaries and smaller independent films. Motion picture piracy is a serious issue and is definitely affecting how long films stay in theatres and whether they play in certain markets. If you want to support a film, going to see it in a theatre is the best way to do so; especially if you can get there in the first weekend, since these box office figures often can make or break a film's run there. Take Centurion, for example: a film very people saw, and which made very little money at the box office. But it was one of the best films I saw in 2010, out of dozens.

Another case in point: George Romero's Survival of the Dead, which I was asked to review for Cinefantastique, and which allowed me to score an interview with George Romero. But when the studio decided to make the film available for online purchase (for about $20), reviews went up all over the internet and my review was usurped by the editor, who felt a need to get something posted immediately. Initial reviews were fairly negative, unfortunately. My interview got pushed back and we never managed to reschedule (Mr. Romero was exhausted and doesn't like doing phone interviews much in any case; maybe next time, George!), and I think this was in part due to the stress from the early online release. 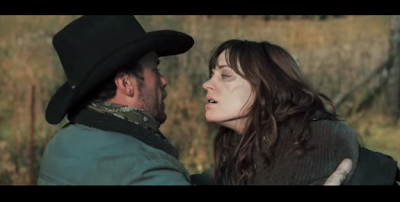 The film itself picks up where Diary of the Dead left off (in which the zombie apocalypse is chronicled by bloggers and those who still have access to Youtube and social networking: An ingenious conceit, really). In Survival of the Dead, two feuding families face off on a remote island, apart from civilization at large and proving that the worst part of the zombie apocalypse is the idiots who are still alive (the new and promising AMC show The Walking Dead also explores this premise). The patriarchs of the two families are reminiscent of a family of old school Texas sheriffs and folksy Irish outlaws. The old white collar world is seemingly obsolete and people do what they can to survive and meet their basic needs. One patriarch decides to enchain the dead and keep them "alive" for reasons unclear even to him; they go through the motions of their living selves, chopping wood, planting seed, never understanding why. There is also a desire for the dead to learn to eat something other than human flesh, which they eventually do. In the final stunning shot, the two patriarchs, now ghouls themselves, face each other with guns at the top of the world (Nova Scotia perhaps?), an enormous full moon behind them.

The film is less a horror gorefest than a sort of allegory of what it means to have a world populated with beings who are neither dead nor alive. Mr. Romero is slowly losing his eyesight and perhaps feeling the need to make films more quickly, and some critics think he may have run out of ideas with Survival of the Dead. But I disagree with this assessment; I think he is exploring the implications of this mythology with increasing freshness and vigor. 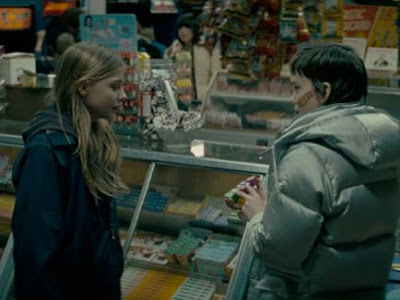 Another film about the undead is a remake of a Swedish film, Let the Right One In. Often an American remake of a successful foreign film can be disappointing (as with the remake of the Norwegian thriller Insomnia), but Let Me In is not only a great remake but a wonderful film in its own right. It reinvents just where it needs to. The film is set in a nameless city, possibly during the 1970s, in the middle of winter. A teenage boy (Kodi Smit McPhee, of The Road) who is bullied at school and can't seem to connect with his mother or estranged father befriends a strange girl (Chloe Moretz, of Kickass) who lives in his building. He eventually figures out that she is a vampire, that her father (Richard Jenkins, from Six Feet Under) is not her father, and that his future lies with her. It's an intimate and unusual film, not for the faint of heart, but not a typical horror film, either. It's subtle beauty is haunting. 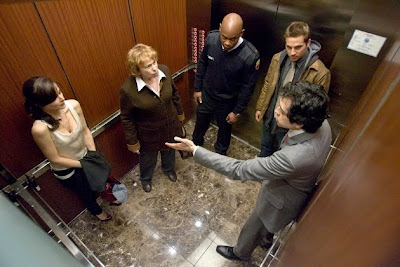 Devil, produced by M. Night Shyamalan, is also an intimate thriller, with a spooky punchline. A group of people (covering a range of ages, races and socioeconomic statuses, naturally) are trapped in a city elevator together, and one by one they experience mysterious injuries. They all suspect one another, form alliances and turn against each other, and finally the true killer is revealed to be, you guessed it, Satan (in the guise one might least expect). It's a fairly intriguing study in human behavior and the nature of evil, and the idea that "demonic possession" is not just an involuntary phenomenon, but a cosmic one. Given the current obsession with possession, exorcism and the religious implications of the occult, we'll probably be seeing a lot more films containing this theme.

Coming in Part Three: The documentaries Sweetgrass, Marwencol and American Mystic, plus a few surprises forthcoming in 2011.
Posted by Peg at 3:55 PM