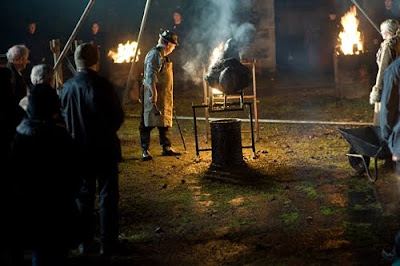 What could be more exciting than a new Hammer Horror film? You remember Hammer; the studio that produced some of the most memorable modern horror genre classics, like The Devil Rides Out; especially those gorgeous, dreamy vampire films of the 1960s and 1970s. Hammer seemed destined to fade into obscurity after their heyday. The studio more or less "hibernated" during the 1980s and regrouped at the dawn of the twenty-first century. They were sold, along with their vast film library, to a consortium, and then again to a new production company. They came back on the scene in earnest in 2008, and found a warm welcome from audiences and critics in 2010 with Let Me In, a very respectable American remake of the Swedish horror hit Let the Right One In.

Wake Wood, which began pre-production three years ago, is finally opening in the UK this week, is Hammer's first film in nearly three decades and promises to be very fine indeed. Advance reviews are starting to come in and are very positive. It had a gala premiere in Dublin and many UK horror fans have been buzzing about it for months. Wake Wood opens March 25th in the UK, and will be appearing in North America later this spring. It looks to be a delightfully Gothic story with occult overtones; can't wait! My friend Robert was fortunate to be present on-set at some of the Dublin shooting locations, and shares his experiences here.

Welcome back, Hammer! Looking forward to your forthcoming remake of Cat People, too, and other horror gems to come.
Posted by Peg at 8:03 PM