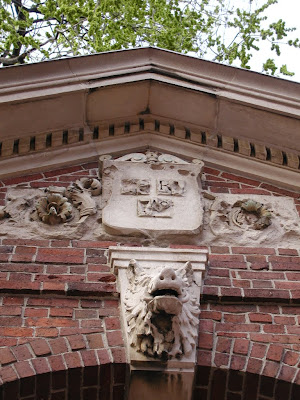 You may have seen this story making the rounds on the internet: Harvard University is hosting a "Social Transformation" conference put on by a student leadership organization known for its right-wing Christianity and anti-pagan views. The group's website doesn't present any obvious anti-pagan rhetoric, but stories on The Daily Kos (which includes a video of a scheduled speaker engaged in a beatific invocation aimed at driving out witchcraft from the land) and elsewhere (the Harvard Crimson calls the scheduled speakers "incendiary") reiterate the group's known anti-witchcraft activism.

A recent article in Newsweek (linked on Social Transformation's website) explores the ways in which Harvard, founded as a training ground for Christian ministers, has become increasingly secular and cannot even support its own "department of religion," instead relegating degrees in religion to the Divinity School located a half mile from the main campus.

From the look of it, this conference may indeed have some anti-occult sentiment lurking beneath the neutral and oh-so-forward-thinking language on its website. The main thrust seems to be that secularism is the dominant mindset in the United States, and an institution like Harvard, founded on Christian doctrine, is in a unique position to address the loss of spiritual integrity in America. To drive out the darkness, as it were.

Response from the pagan community has been predictably over-the-top, with many referring to the group as "witch hunters." Some are calling for protests. There are petitions decrying Harvard's decision to host the conference. Laurie Cabot's group has posted a rather long and byzantine Note on Facebook.

Are some of the scheduled conference speakers anti-pagan? Yes, it would seem so. Is Harvard at fault for allowing this group to use their campus for their conference? No.

Harvard itself is not anti-pagan. I myself have taken courses in Witchcraft and Celtic Paganism there, in two different departments. I also co-organized two academic conferences, in 2006 and 2007, focused on paganism in media. We received nothing but total cooperation and support from various departments at Harvard, including the Committee on Degrees in Folklore and Mythology, the Harvard Film Archive, and the Department of Celtic Languages and Literatures. Our guest speakers included Fiona Horne, R. J. Stewart, and Ronald Hutton. Clearly the campus is interested in hosting a diverse cross-segment of the academic community.

Here's the thing: as offensive as this weekend's conference may seem to some of us, the conferences put on in 2006 and 2007 were very likely offensive to others. Granted, Harvard was not bombarded with protests at that time (that we know of), but they might easily have been. As an institution of higher learning, they are expected to remain open-minded and neutral, and be respectful supporters of free speech.

Some might counter such statements by saying that hate speech isn't covered by the First Amendment. But what is and isn't hate speech is largely a matter of opinion. I have to say, given some of the anti-Christian invective I have seen spewed by the pagan community at times, I'd be hard-pressed to say that the right-wing witch-haters are any worse when it comes to hate speech. I'm not happy this conference is happening at Harvard, but I can't say they should be stopped from hosting it. And I think that protesting Harvard is a bit wrongheaded. They're not the ones who are anti-pagan; the "Social Transformation" folks are. And frankly, anyone who finds this kind of rhetoric compelling or reasonable is not likely to listen to a calm discussion of what does and doesn't constitute free speech.

The only way to really shift anyone's mindset is to behave with integrity. Don't get angry or indignant. Don't point fingers or call names. It just fuels the fire and allows our detractors to feel justified in their views. There is a constantly rising and receding tide of fanatical Christianity in this country; it does seem to be rising slightly at the moment, and it will do so again. The fact that it's all tied up with our national politics makes for some interesting and frustrating times. But we can rise above the insanity.

Just keep it in your pants, people: be respectful, listen, and disagree where you disagree. And educate where you can. And always, always, work towards understanding.
Posted by Peg at 7:02 PM