Drop Everything But Your Pants! 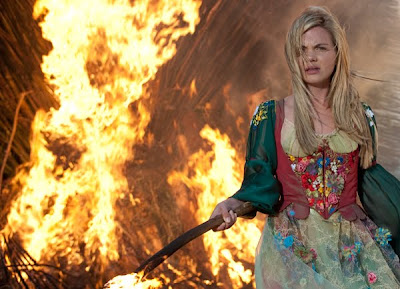 The news is that The Wicker Tree (Robin Hardy's new film based on his 1973 cult hit The Wicker Man has a distributor. Anchor Bay Entertainment will be distributing the film in the United States, and the film will also be a selection at this year's Cannes Film Festival. This according to Fangoria magazine (as reported by The Wild Hunt blog--which has given the film's development some excellent coverage--and shared at the Witchvox Facebook page, too).

For a film that has struggled to procure funding, this is wonderful news indeed. One earlier title, Cowboys for Christ (after The Riding of the Laddie had been considered and rejected), misled some right-wing Christian investors who, after learning of the film's pagan themes, decided to pull their funding. The Wicker Tree conjures memories of the earlier film and so is a better title, anyway, in my opinion.

Will the sequel heal the wounds of the travesty of a "remake" helmed by sexist miscreant Neil LaBute? Well, it certainly could be no worse.

I've recently been in touch with Mr. Hardy and am hoping to arrange some sort of screening event stateside. More news as events warrant...
Posted by Peg at 11:47 AM