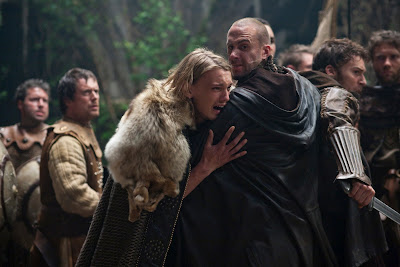 Are we suddenly caught up in a flurry of things medieval? What with Game of Thrones and Camelot on television (this fun article weighs the merits of both shows), not to mention Your Highness and Vision: From the Life of Hildegard von Bingen in theatres, and both Centurion and The Eagle a few months ago (okay, those two weren't strictly medieval, but you get my point), you'd be not all that crazy to think so. Then there was Black Death which didn't really make the rounds as I'd hoped it would.

This summer brings a healthy crop of sci-fi and fantasy films, but only one of them is even vaguely medieval: the new Conan the Barbarian. I think we can expect to see plenty of films based in the ancient world, however, as cinema reaches out to us to try and spirit us away from the increasingly-distressing here and now.

I am waiting patiently for John Boorman's new film about Hadrian.
Posted by Peg at 9:47 PM