Pixar, does she HAVE to be a princess?

Not only that, she is SCOTTISH!

Sigh. Really? It's not enough for her to be a badass with a bow and arrow? She has to be a PRINCESS, too?

Brave looks to be a fun historical romp, obviously inspired to some degree by Braveheart (it was previously titled The Bear and the Bow), and will be a nice way to have some kind of Celtic culture trope out there that's not related to pirates or drinking or dancing. (But I bet there will be some dancing and possibly some subtle suggestion of drinking in this one).

There are some trailers available online, like this one, showing the fierce maiden Merida riding her warhorse through misty forests and stone circles. If nothing else, the use of landscape should be very satisfying for pagan audiences. Also, Merida is more interested in archery than in men...at least at first. Will she remain independent? Or wind up with a man? We'll find out next summer.

The characters, on the other hand...well, despite the lead character being very beautiful, the others are cartoonish and exaggerated in typical Pixar fashion, like these tough guys with their woad tattoos and subtly-shaded tartans.

Princess Merida's main challengers is a blue ball of light referred to as a will o'the wisp, and a huge black bear (a powerful animal in Celtic mythology). But she apparently unleashes these harmful forces when she defies tradition to forge her own path. 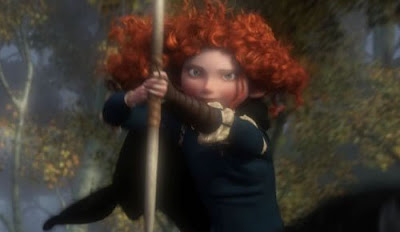 Maybe this means she is not really into the idea of being a "princess" after all? (Wow, does this mean little girls will start wearing some color other than PINK for a while? It does clash with red hair, after all). The idea that little girls should aspire to be princesses is a tired an annoying stereotyoe and we really need to get away from it. I sincerely hope this film will put a different message out there. Maybe there will be a positive new role model offered for girls: a nature-loving, athletic, independent gal who knows her way around the forest and a bow and arrow. Now we like the sound of that! We also like the sound of some of the actors whose voices will be featured: including Kelly Macdonald, Billy Connolly, Emma Thompson, Kevin McKidd, Craig Ferguson and Robbie Coltrane. 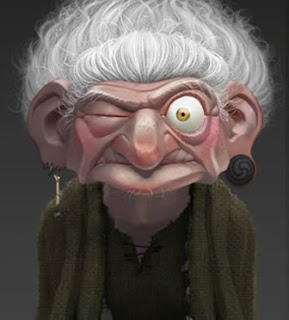 Oh, and did I mention there will be a WITCH? Voiced by Julie Walters (aka Ron Weasley's mum). She's old and ugly. But they do also refer to her as a "wise woman." Then again she grants a hasty wish to Merida, which ends up being more like a curse. Hmmm, careful what you wish for? Well, we wish for this movie to give us something to cheer about.