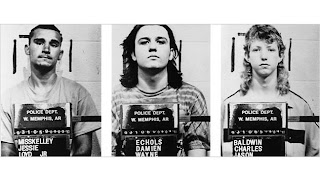 If you have HBO, I hope you're planning on watching the premiere of the third installment in the PARADISE LOST series tonight! PURGATORY concludes the eighteen year saga of the West Memphis Three, who spent nearly two decades in prison after being convicted of the brutal murders of three eight year old boys in West Memphis, Arkansas.

I had the pleasure of seeing the film in New York last fall when it had its US premiere at the 2011 New York Film Festival (an earlier version, finished prior to the August 19th decision to release the Three from prison, was shown at the 2011 Toronto Film Festival), and the distinct honor of being able to see Jessie Misskelley, Jason Baldwin and Damien Echols receive the thunderous applause of hundreds of people who gave them a standing ovation.

As well, the filmmakers who made these documentaries and did so much to raise awareness and give hope to these three young men were given their due honors: Bruce Sinofsky and Joe Berlinger. Their work is a testament to the power of cinema and media to inform, inspire and quite literally change lives.

I will be posting my review of the film this week. But I'll be very interested to hear responses from any of you who are watching tonight (9pm, EST).
Posted by Peg at 4:49 PM