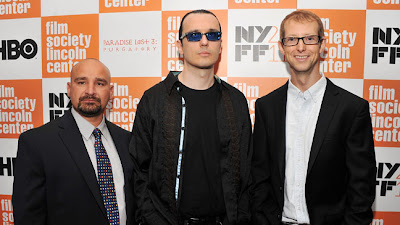 Although it won't be shown on HBO until sometime in early 2012, and has not yet had any theatrical release, the third film in the Paradise Lost series has had two major premieres at film festivals so far. The first was in Toronto, in its original version, and more recently in New York, with the premiere of the recut version, including footage shot after the West Memphis Three were released on August 19th.

I was fortunate enough to attend the New York premiere on Columbus Day, with a crowd of hundreds in Alice Tully Hall AT New York's Lincoln Center. Filmmakers Joe Berlinger and Bruce Sinofsky were in attendance and introduced the film by giving thanks to their families, crew and producers. The third film marks a superbly satisfying completion of this long ordeal, ending as it does with the release of these three unjustly-imprisoned men.

After the film screened (I will review it closer to its theatrical release date, but I will say there is a good deal of focus on the fact that new suspects are being considered in the 1993 murders), the audience gave a standing ovation to the West Memphis Three, seated in the balcony. Then Joe and Bruce came back up on stage accompanied by the NYFF director, and with Damien Echols and Jason Baldwin (Jessie Miskelley, Jr. declined to come up as he experiences anxiety in large crowds). There wasn't time for many questions as another screening was happening shortly, but four questions were asked and fielded by NYFF director Richard Pena, one of them by a former schoolmate of Damien's who asked why he had changed his name back in high school.

I felt lucky that I was called on to ask a question of my own. First I said thank you to Damien, Jason and Jessie, along the lines of "Thank you for surviving what must have been an unimaginable eighteen years, that most of here can barely imagine, and for being here so that we can all celebrate your freedom and your courage." That got some applause, then I said, "You were convicted in part because of your beliefs, Damien: your beliefs as a Wiccan and a pagan. Then you became a Buddhist. I'd like to ask both Jason and Damien, what part has your spirituality played in your ability to survive the last eighteen years?"

Jason answered first. He spoke to the difficulty of accepting the fact that he could be found guilty when he was innocent, and looked to his faith (he is a Christian) to help make him strong enough to face his despair. Damien then said, "Two things helped keep me alive while I was in prison: my wife, and my spiritual practice." He then said it was not only his practice that helped him mentally or emotionally, but physically as well. He said that he suffered physical torture of all kinds to his body, and that adequate medical and dental care were very hard to obtain in prison. He then added that one had to look out for oneself, and that his practices of reiki and energy work helped him keep his body healthy.

The crowd gave at least two standing ovations to the Three, and to the filmmakers, and this felt like such a momentous occasion that many of the details are fuzzy. I did hear one fascinating and delightful bit of gossip in the lobby, however: that Damien had gotten a huge tattoo recently, while sitting next to Johnny Depp, (who reportedly got the same tattoo, an I Ching symbol). Now if that's not the coolest thing Johnny Depp has ever done, I don't know what is.

This week, Damien was in New Zealand visiting filmmaker Peter Jackson, and rumor has it he will be given a small role in the new "Hobbit" film Jackson is directing. From the rural trailer park of his youth, to 18 years on Death Row, to being friends with the likes of Peter Jackson and Johnny Depp? How wonderful that these men finally have the chance to live large and enjoy their hard-won freedom.
Posted by Peg at 4:45 PM