A Witchy Walk Through the Neighborhood 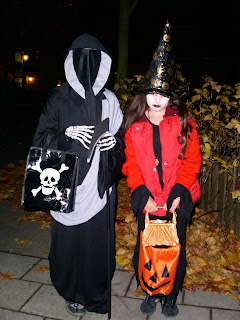 Hallowe’en was a sensory holiday for me as a kid, and still is. The colorful costume parades, the chill air, leaves crunching underfoot, juicy apples and home-made doughnuts, the smell of burning leaves: these sensual memories mean autumn to me. I loved carrying that plastic pumpkin for trick or treating, feeling it grow heavy with treats. The sight of a tree without its leaves against a violet sky filled me with spooky dread, but also a sense of awe. When November arrived, I looked forward to that in-between feeling, of autumn clinging fast, its last golden days giving way to winter, and that first snow that was much more thrilling than a basket of candy. 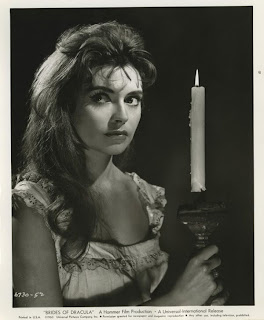 And Hallowe’en was always that point when it was clear winter was really coming: you had to prepare a costume that you could layer an extra sweater under, in case it got cold. The gathering of sweets mirrored the hoarding of nuts by the crazed squirrels scrambling through the fallen leaves. Children dressed as fantastical beings in diaphanous gowns, silvery suits, clothing we’d soon forgo in favor of wooly skirts and itchy pullovers. One last decadent night of hell raising before hibernation! Hallowe’en came one week after my birthday, and it was like celebrating non-stop for a week.

But being a practicing witch means I have a very different perspective on this holiday as an adult. For modern witches, Hallowe’en is known as Samhain, a Scottish term meaning “summer’s end” that marks that halfway point between autumn equinox and winter solstice. We also call it Hallows, or sometimes All Souls Night. Growing up a Catholic, I attended church on All Saints Day, the day after Hallowe’en, But I didn’t quite understand the connection between the two, and assumed the church held their mass the day after simply because Hallowe’en was too busy and who would want to go to church when they could go door to door gathering candy?

These days, I tend to celebrate this feast of the dead in somber and often unusual ways. The coven I work with has an elaborate cycle of rituals beginning in spring and culminating at Samhain with a rite called “Harvest Home,” (based in part on the wonderful novel by Thomas Tryon) in which a young Harvest Lord is symbolically slain by his consort, as a sacrificial offering to fertilize the crops and balance the cycle of life, death and rebirth: the Eternal Return. I have been to large public rituals where guests were invited to speak of their loved ones who had passed over. And I have attended vigils that were peaceful and serene, with candles everywhere and plates of food left for the dead and denizens of the Otherworld. 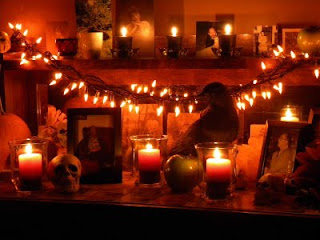 Some witches celebrate this holiday as the Celtic New Year; and do rituals and rites appropriate for new beginnings. This year, Samhain occurs just after the New Moon in the sign of Scorpio, a very portentous timing. The sun has also just entered the sign of Scorpio, a sign associated with death and regeneration. It is said that at Samhain, as at Beltane (May 1st), the “veil between the worlds,” or the barrier separating the realms of the living and the dead, grows thin and permeable, and allows us to commune with our beloved dead and our ancestors. For this reason many witches and pagans create altars dedicated to their ancestors and dead loved ones, with photos and mementos, favorite foods or flowers. 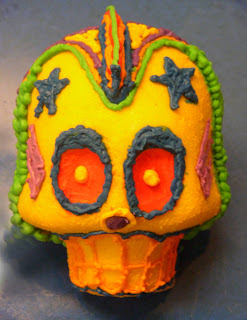 Hallowe’en has become ridiculously popular, and it’s big business for retailers (a number of whom specialize in Hallowe’en year ‘round). Related holidays are receiving more notice too, such as Mexico’s Dios de la Muerte/Day of the Dead, and I know a few witches of European ancestry who decorate sugar skulls with their children. Horror movies abound on television in October. Is it that our culture is becoming more interested in occult matters generally, a sort of second occult revival? Or are we merely so susceptible to social trends and their trappings that we have no idea why we’re so obsessed with the baubles and symbols of death? 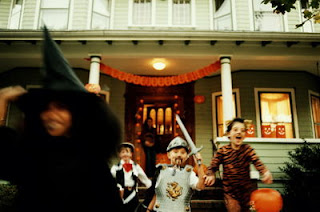 Or perhaps, in our yearning for some decadence in frightening times, we grab hold of outrageous forms of fun. We recall what used to thrill and delight us as children (horror and sugar), and even if it’s about death, it makes us feel alive, and somehow comforted. We occupy our neighborhoods with treats, and flashlights, and gaudy clothes, and glee. And know we’ll make it even more fun next year.

And the witches among you (we’re there, oh yes), we’ll also decorate our doorways with cornstalks and pumpkins, and put candle-lit skulls in our windows. We’re staving off the darkness, too.


(Samhain altar image from "Dancing Beneath the Moon" blog) 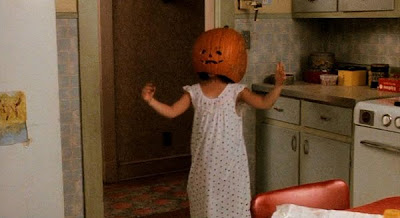