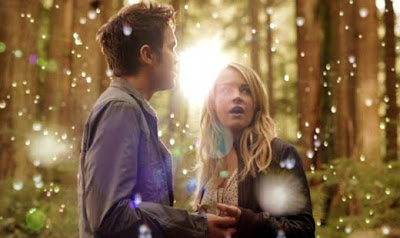 Well, it was about what I was expecting: derivative, not very well-written, and obviously designed to appeal to teenage viewers. But that's okay: it's been over a year since the premature cancellation of Eastwick with no new shows about witches in all that time, so we'll take whatever we can get, right?

I felt like I had already seen a fair amount of the episode, having watched the seven minute trailer which featured the beginning and a few major plot points. Cassie, the beautiful blonde teen who is our heroine (actress Brittany Robertson bears a striking resemblance to Michelle Williams), is the new kid on the block and in school (sounds like The Craft, right?) in a charming coastal town in Washington state. She is immediately recognized and set upon, albeit slyly, by a handful of attractive students who react her variously with kindness, disdain and infatuation (sounds like The Craft, right?). We learn prior to her arrival that Cassie's mother has been killed (sounds like The Craft, right?), burned to death in her home, by someone who ives in Chance Harbor and who obviously has his eye on Cassie, too. Cassie's father is also dead, and she has gone to live with her grandmother in the house her mother grew up in. This theme of "absent parents" is common in stories where a young person is involved in dangerous and occult goings on.

Cassie is invited by one of her classmates to a deserted house, where a group of students inform Cassie that she is a witch, just like they are. That their powers date back to the 1600s, linked through their family line (Sounds like Charmed, right?). One girl in the coven of witches (Diana, like the mood goddess, get it?) likes Cassie, and her boyfriend Adam likes Cassie, too, maybe a bit too much--we know this because the forest lights up with colors and sparkles right before they almost kiss, which is bad because of course he has a girlfriend. Oh noes! Teen hormonal angst! Another girl, Faye (Phoebe Tonkin, an Australian actress who is kinda awesome) seems to dislike Cassie either because she's jealous, or just plain mean to everyone (kinda like Nancy in The Craft). But then, her name is Faye, like Morgan le Fay, get it?

The man who burned Cassie's mother's house shows up suddenly, expresses his sympathies to Cassie and looks at her in a creepy way. Cassie finds an old, magical book (sounds like Charmed, right?) and learns that it dates way, way back to the olden days, when the ancestors of this group of witches first came to Chance Harbor.

The mean girl Faye makes it rain! Then Cassie makes it stop raining! They all stand around in skimpy wet clothing! They're witches!

As other reviewers have pointed out, the show is nothing special but since it airs immediately after the wildly popular The Vampire Diaries, it should do all right. I will probably keep watching just to see where they take it.
Posted by Peg at 5:45 PM