The New York Times, The Lost Abbey, and What Microbrew Goes Best with Crow?

Just in time for Hallowe'en, the New York Times has weighed in (can you believe it?) on the Lost Abbey controversy. The tongue-in-cheek tone of the piece makes me think that perhaps some folks in the pagan community reached out for some media coverage on this, and perhaps got more than they bargained for. The news is making the rounds in the beerosphere, too: The Full Pint, a beer lovers' news site has also offered its take, after first posting on it last week. The Wild Hunt also reports on the latest developments in this issue and, as always, the comments section is a collection of diverse opinions. At least one commenter mentions that one prominent witch and author actually suggested HEXING the Lost Abbey Brewery (on a Yahoo group mailing list, apparently). But, seriously? HEXING? To what end? To make them go out of business? To cause their buildings to go up in flames? This is seriously out of line, people.

Then again, the controversy generated over this has been nothing short of ridiculous. I posted the New York Times link to Facebook via our Witches' Voice page of links, and had people screaming at me (or, you know, the internet equivalent of screaming) for daring to speak for the Witches' Voice on this matter (uh, I don't speak for them, for the record, folks. I'm one of several people who has the ability to post news links on the Facebook page). In typical (if unfortunate) Facebook fashion, the comments have been volatile and not always very well thought out.

Which brings me to a very thoughtful piece of writing I found today on the Lost Abbey website. I repost it here. I hope the folks at Lost Abbey won't mind. I'm okay with their using the term "Brew Ha Ha" which I of course believe I cleverly thought of first, so I guess we're even.

"This morning, my phone roared to life as it does each day when it awakens from a short but well deserved slumber. Google Mail alerted me that the New York Times had indeed published the article detailing our week long conversation with members of the Pagan Community. And unless you have been around the brewery for the last week, you might have missed these conversations.

You see, they started last Friday October 15th at 12:01 AM when a slew of emails hit our Lost Abbey in box. Many of them were of the cut and past variety and they all were sent to detest our “New” Witch’s Wit label. We thought this odd since the label was first produced in 2008 and has never once inspired anyone to contact us to express their displeasure.
Turns out that recently a very famous member of the Wiccan Community “found” our beer in a store. She was immediately appalled by our use of 16th Century images featuring a Witch being burned at the stake. Blogs, Facebook and Twitter were all employed to mount an assault on our systems. An email campaign was also started and a barrage of very similar emails filled our in boxes for the duration of the weekend.

Many of these emails labeled our Marketing and PR Departments as ignorant, woman hating Cretans. Some claimed that no sane person in their right mind would use an image of a buxom Witch being burned at the stake for commercial gain.
We have a stack of emails asking whether we would show Jews being gassed or African American’s being lynched. Of course not was our reply. Others seemed to think we were responsible for recent incidents in Darfur as well. It was amazing chain of events to say the least.

Apparently, many of the emailers didn’t bother to spend time researching our branding and the positioning of our beers. In blindly denouncing our original art and the satire of our labels, most of the emailers failed to connect with our brands. Looking at these emails, it was obvious that in our desire to tell a great story, we had forgotten to get that information on our website in a meaningful way.

Sitting in my office, I can honestly say it was hard for us to see the forest from the trees.

Since day one, The Lost Abbey has been about original artwork, original beers and original back label stories tying them together. I know this because it’s been my job to develop the beer, commission the original artwork and write the back story for the label. This has been no easy task. Yet, I am very proud of our labels. They are cohesive and constantly work at pushing the boundaries of beer as art.

But we’re still missing some of the storytelling aspects on our website. So we’ll be adding this to our list of things to do in the not so distant future.

But getting back to the Pagan and Wiccan brewhaha that ensued is why I am blogging today. Sage was tasked with answering the communities and in his response he emplored the emailers to approach our beers as a collection of original artistic pieces displaying the struggle between good and evil. As soon as this email began making the rounds, some members of the pagan community responded with more positivity; others were still not placated.

Each day last week, I came to work and wanted to communicate this situation to our Lost Abbey Clergy. I felt it was important to share this with the consumers of our beers who support the artistic direction of this brand. Ultimately, I decided against it as this because I didn’t want to fan the flames of this little wildfire. This was incredibly difficult for me as I received some memorable emails and quotes like this one: “Screw you, you fat ass beer slugging alcoholic Christian Ass Hole.”

But now that the New York Times published a story in today’s paper detailing our situation with the Pagan and Wiccan communities, I typed this blog post to share my thoughts with you. Please go read the New York Times piece. Then please go read the notes I published about our Witch’s Wit Label on our website. When you’re finished, you can use this forum for comments about this beer. We’d love to hear what you have to say about this.

At this time, the only decision that has been made about this label is that we have agreed (as owners) to discuss this label controversy at our meeting in November. We remain committed to the art of story telling and using beer as our medium and hope to keep delivering more amazing beers and storys for years to come."


I think it's wise for them to wait until November to make a decision about this. I applaud the author's willingness to share the brewery's experience. Boy, talk about a witch hunt. It sounds like some of the "email protests" directed towards them were downright abusive. Meanwhile, given the numbers on the calendar and the abundance of candy and spooky kitsch on store shelves at the moment, I wonder how many more news outlets will give space to this story? 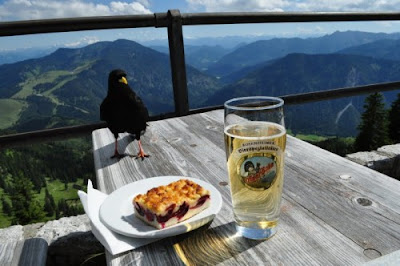 I was blissfully unaware of any further developments on this issue over the weekend. I was in western NY, closing down my campsite for the season, and enjoyed my birthday on Saturday the 23rd with a lovely steak dinner at a tavern in the woods, and hoisted a glass of microbrew called "Nosferatu." Ironically, I was thinking of Lost Abbey as I did so, drinking a silent toast to them for standing their ground in the midst of the protests. I hope they know, not ALL witches have a problem with their label. I think I'l toast them again tonight with a bottle of "Hex" from the Magic Hat Brewery.
Posted by Peg at 11:13 AM