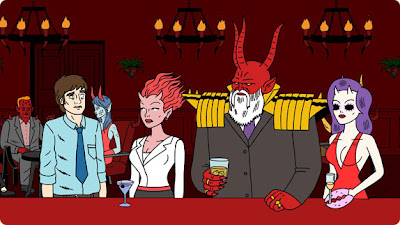 Ugly Americans is a relatively new animated show on Comedy Central, which features demons, zombies, wizards and all kinds of assorted characters who have taken over America in the not too distant future. Tonight's episode was entitled "Hell for the Holidays" and opened with a reference to "Samhain (pronounced correctly), our national demonic holiday." Mark Lilly is a normal-looking human who is dating a female demon named Callie (portrayed as a seductive and sexually-insatiable woman with red hair that looks like it's made of flames). Mark presides over a meeting at his office that is meant to promote tolerance of Samhain. Callie's father invites Mark to a weekend at their "lake house" (in Hell, naturally), where, unbeknownst to Mark, there will be a reunion of sorts known as the annual "Games."

One character announces: "I would like to wish you a happy and evil Samhain." I's nice to see they did their research and at least are pronouncing it correctly! I mean, even The X-Files did not manage to do it right. (Ya like that little blast from the past?)

Other choice quotes from this episode:

In the demon forge: "Then it's off to a demon inspector who will check for lunacy, strength and genitalia barbing."

Receiving some flowers: "I'll put those in some goat's blood right away."

"The new wife buries the old one on Samhain, at midnight."

"The blood courts have already been reserved!"

Bing Crosby zombie, to a man who has just wished him a Happy Hallowe'en: "I think you mean Samhain, there, David; Bah buh buh bah, BRAINS!"

Normally I don't think this show is all that clever, even though it's chockfull of popular culture references. But tonight's episode was fun, especially following an episode of South Park in which British Petroleum, after causing a disastrous oil spill, decided to drill for oil on the moon and managed to unleash Cthulu!
Posted by Peg at 7:32 PM