Harry Potter and the Deathly Hallows, Part One 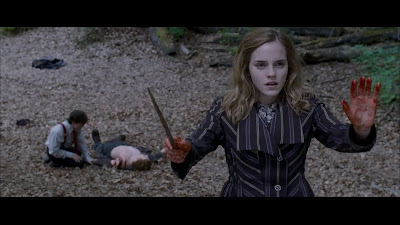 The Dark Ages, the Light Within

Harry Potter and the Deathly Hallows, Part One

For all of you who think the Harry Potter franchise can do no wrong (and of course they will have already seen this newest installment by now), you’ll be happy to know that Harry Potter and the Deathly Hallows, Part One, directed by David Yates, is by far the best of the films so far, a close second to the third film (my own personal favorite), Harry Potter and the Prisoner of Azkaban, directed by Alfonso Cuarón. Even with stellar casting every step of the way (with some of the UK’s finest actors happy to join in), it was not always clear that the three young stars would continue to mature and carry the films at the level needed as the stories became darker and more adult. For a time, I was somewhat concerned that the adorable Rupert Grint was simply not a good enough actor to cut the mustard; earlier films found him working too hard at acting, with absurd facial expressions (what experienced thespians call mugging). But he’s grown into the role beautifully (and perhaps has had some more sensitive directors), and it’s Ron Weasley who undergoes the darkest and most troubling transformation of the three in this, the sixth and penultimate film in the series.

The story begins with a feeling of unease, with Harry (Daniel Radcliffe), Hermione (Emma Watson) and Ron leaving their families to protect them from the increasingly dangerous pursuit of the seedy underbelly of Hogwarts’ Old Boy (and Hag) network. Led by Severus Snape (didn’t he used to be a good guy? Alan Rickman is so much more interesting as a villain, in any case) and Lucius Malfoy (Jason Isaacs) and son Draco (Tom felton), as well as Lord Voldemort (Ralph Fiennes), the team bent on destroying Harry and those close to him also now includes Bellatrix Lestrange (Helena Bonham Carter, whose career has moved from period dramas to spooky fare, thanks perhaps to her marriage to Tim Burton), and a motley crew of mercenaries and Death eaters. But despite the three friends’ pleading attempts to leave their loved ones out of it, the Weasleys and various others (like Hagrid and Professor Lupin) risk their own lives to protect Harry. As various threats close in on them, and Ron decides to abandon the cause, Harry and Hermione draw closer, and do their best to fight back against the evil magics aimed at them.

There is more to it, of course. There are horcruxes and woodland creatures made of light. There’s a tale of three brothers who cheat death (the “Deathly Hallows” of the title is rendered in a brilliant animated segment narrated by Hermione). There’s a cross country journey that finds our intrepid witch and wizards camping on limestone cliffs and beside lake valleys. There's no shortage of references to current political situations taking place in the world. There are some intriguing new and nearly-forgotten characters played by more cream of the crop British actors (Rhys Ifans, John Hurt, Bill Nighy and Imelda Staunton). And there’s a lovely vignette featuring a song by Nick Cave.

Although the film tends to skim over seemingly-significant plot details and actions, there is a wonderful mood and pacing to this film, full of suspense and an increasing sense of forboding and finality. The visual effects and overall production design are simply excellent, perhaps the best so far in this series, despite having very few scenes set in the grand halls of Hogwarts (although the exterior locations are thrilling, shot in Wales, Scotland and throughout England). The animated sequence I mentioned earlier is one of the film’s finest moments, and it’s some of the most stunning animation I’ve seen anywhere in recent memory.

Those who have read the books know, of course, how it ends. But it’s a testament to the film franchise’s artful adaptation that one need not have read any Rowlings’ books to appreciate this epic story. And I really see no reason not to break Deathly Hallows into two parts: it gives fans one last film to look forward to, allows the story to be told in more detailed fashion, and, of course, makes the studios another wad of cash. And Deathly Hallows does end on a razor-edged note, perfectly poised to make us all groan and wish that Part Two was not so far away.

So, what of the story's magical and occult content? I have felt that the teacher-student relationship probably does carry some resonance for those witches who have followed this model. The death of an elder, such as we saw with Dumbledore's passing, can be a profoundly sad experience. In Deathly Hallows, Dumbledore has bequeathed some of his magical tools to his three prized pupils. But, despite the many magical baubles, spells and teachings, I've found all along that the films basically deal with the trappings of magic as metaphors for life, specifically, the journey from childhood to adulthood, with the stormy turbulence of adolescence a time of troubling transitions. The franchise mines this metaphor for all it's worth: I recall when the third film opened with Harry under the covers reading his magical books with a flashlight, as if they were skin mags. Harry now seems to wear his "chosen one" status like a reluctant mantle of privilege, as a paparazzi-plagued young prince might. Hermione's shift from tomboyish bookworm to attractive, sensitive young woman who sometimes lets her emotions get in the way of her judgment, has perhaps disappointed those who had hoped for a "witchcraft is empowering!" message. And Ron, our favorite scruffy underachiever, seems to have grown into a loveable but imperfect youth who is capable of childish jealousy and even violence in other words, a man.

Since Part Two will pick up immediately where Part One has left off, the characters will not have aged significantly. But maturity is another matter. The trials our three young magic users have endured have forced them to make some very adult decisions, some of them hasty, others measured, and often with regrettable results. I've no doubt the story will end on an uplifting and redemptive note, and for that, I am happy to wait. 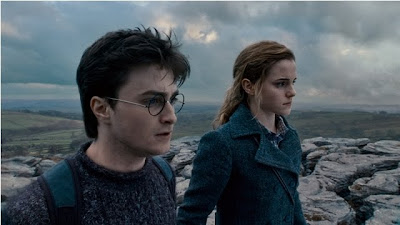