Season of the Witch: Finally! 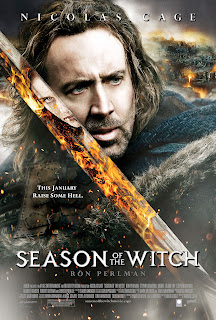 After seeming to lie fallow for a number of months, it now appears that SEASON OF THE WITCH, the medieval horror thriller starring Nicolas Cage, will be opening in theatres January 7, 2011. The website 'I am Rogue' debuts the new poster for the film, with the tagline "This January Raise Some Hell."

The Internet Movie Database gives the following description: "A 14th century Crusader returns to a homeland devastated by the Black Plague. A beleaguered church, deeming sorcery the culprit of the plague, commands the two knights to transport an accused witch to a remote abbey, where monks will perform a ritual(italics mine) in hopes of ending the pestilence."

Yes, folks. One woman, the cause of the plague that ravaged millions of lives in medieval Europe. Even though it's also possible the plague was caused by bacteria spread by fleas, carried on rats, produced by filth, it being, you know, THE FRICKING DARK AGES.

Interestingly, the bubonic plague (aka the Black Plague or the Black Death) has made a comeback in recent years. Found on cats, no less. The modern witchcraft movement is continuing to grow, too. Coinkydink? 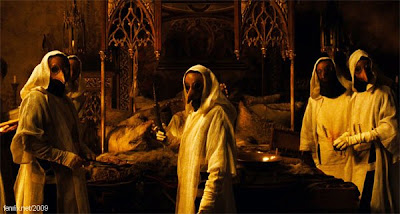