THE WICKER TREE gets a sneak preview...in Wales. 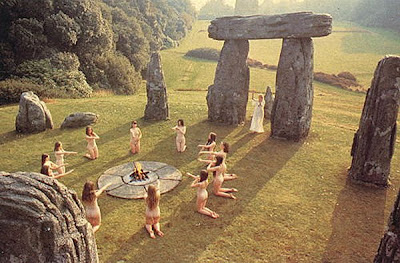 So, those of you who live anywhere near Aberystwyth, are in for a treat! As the BBC website reports, Robin Hardy's new film THE WICKER TREE, the long-awaited sequel to 1973's THE WICKER MAN, will be having a promotional event there this Sunday, November 14th. A 12 minute clip of the film will be shown, to get people excited for the feature film's release, which will be in the spring of 2011. Robin Hardy, interviewed for the article, says he had not really had much interest in doing a remake or sequel until he saw the 2006 aberration starring Nicolas Cage and written-directed by Neil LaBute. It's heart-warming to know that Hardy, who is now in his eighties, felt strongly enough to give the world another taste of his influential and legendary film. The article also mentions that Hardy is beginning work on a THIRD film in the series.

Jason at The Wild Hunt has been covering the progress of the film so far, as did Wren at Wren's Nest (which has been replaced by a wonderfully active news link page on Facebook), and I know the pagan blogosphere will be abuzz about it in the months to come! I am going to try and score an interview when the time comes, so watch this space.
Posted by Peg at 7:49 AM