The West Memphis Three: Will Justice Be Served, at Long Last? 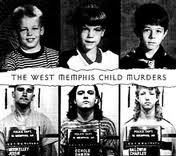 Today CNN reported that the Arkansas Supreme Court has ordered that the cases of Damien Echols, Jason Baldwin and Jessie Misskelley, Jr. be remanded to the lower court for a new hearing, which means that new evidence may be presented. That means DNA evidence and other evidence which may well exonerate Damien Echols; and if Echols, the alleged "ringleader," goes free, it's likely that Misskelley and Baldwin will also be released.

As the article reports, previous DNA testing conducted between 2005-2007 (nearly ten years after the initial trials took place) was not allowed to presented at an evidentiary hearing because the circuit court misinterpreted the state's DNA testing laws; this is the error the Supreme Court took issue with in granting the hearing and the potential for a new trial. The DNA testing revealed DNA consistent with the hair of Terry Hobbs, stepfather to Stevie Branch, one of the 8 year old victims, and also consistent with a friend of Hobbs.

The article also states: "Prosecutors successfully argued that the defendants were involved in a satanic cult and that punctures and cuts on the boys' bodies indicated a ritual sacrifice." There were other statements made in court testifying that there were numerous indicators of "satanic crime" (including the wearing of black nail polish), according to an idiotic expert witness named Dale Griffis, a self-proclaimed occult crime specialist who obtained his degree from a mail order university (this fact was also revealed in court). For more information on the case, visit the official supporters' website, or see the films Paradise Lost: The Child Murders at Robin Hood Hills and Revelations: Paradise Lost 2, by award-winning documentary filmmakers Joe Berlinger and Bruce Sinofsky. (A third film is in the works).

You've probably read it all before (the Witchvox coverage of this matter has been extensive). Damien Echols wore black, Damien Echols practiced Wicca. Damien Echols wrote Aleister Crowley's name several times in one of his school notebooks. Damien Echols listened to heavy metal music. Damien Echols changed his name to "Damien" after the priest who worked with lepers (but of course it's also the name of the child born of Satan who is selected to take over the American government in the 1976 film The Omen).

In 1993, when these horrific murders took place, the community of West Memphis, Arkansas was a very Christian place with a very sensationalist understanding of the occult. Numerous television specials by self-styled journalist Geraldo Rivera in the late 1980s and early 1990s hyped the idea that there was a nationwide epidemic of satan worship and related activities, and lathered many Americans into a panic. He even played a scene from the 1987 fiction film The Believers to set the mood. Yes, folks, if you thought these people must have been watching too many movies, you were right. In this blog, a self-proclaimed "conspiracy nut" uses this photo from the Stanley Kubrick film Eyes Wide Shut beneath his definition of Satanic Ritual Abuse. 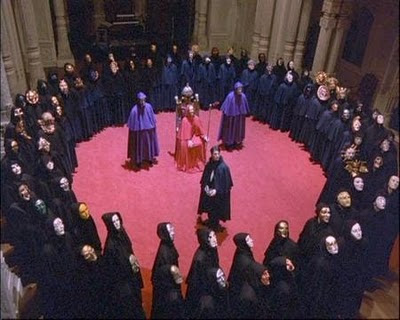 To his credit, Mr. Rivera eventually apologized for his role in playing up the satan scare (in 1995; two years too late to save the West Memphis Three from Death Row and life in prison).

No apology has been forthcoming thus far from Ms. Oprah Winfrey, who also hosted episodes of her famous talk show devoted to talk of satanic panic. During one such episode that I viewed, Winfrey said "The only possible explanation for this behavior is that these people are possessed by the devil." Winfrey hosted many so-called "victims" of satanic cult crimes and their families, many of whom were later revealed to be complete frauds, or whose experiences (such as the friends who accompanied Mark Kilroy, a young man murdered by drug dealers in Mexico) were unrelated to any occult crimes in the United States. A brief video from one such episode, in which Winfrey interviews a woman who claims to have been brought up in a "nice Jewish family" of murdering satan worshippers who have been practicing since the 1700s can be viewed here. Such stories seem ludicrous now; but at the time, many people took this seriously.

Despite the inept and, some have said, corrupt actions of the police and the courts in Arkansas where this case is concerned, despite, all the ridiculous and false testimony given that the jury took at face value, despite the sensationalist tactics of the media that made it impossible for potential jurors to remain impartial, despite everything that went wrong in Arkansas, we have to acknowledge that the indulgent circus of satanic panic that gripped our country for well over a decade (and, to this day, still has a foothold in many communities) is to blame for this injustice.

Contemporary witches and pagans everywhere are duty-bound to learn the facts of this case and to take to heart its lessons. This could have been any of us. But it happened to three boys from a poor community in Arkansas.

Three boys were murdered in cold blood, and their killer or killers have not yet been apprehended. Three more boys who were wrongly accused and convicted of the murders have been rotting in prison for a decade and a half. We need to do everything we can to demand that justice be served, to all six of them. So Mote it Be.
Posted by Peg at 9:05 PM