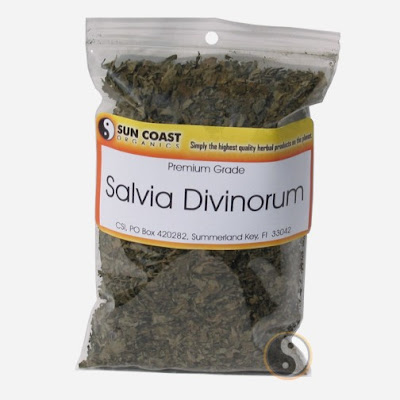 Here's an example of how blatantly the media tries to sway us into believing things that common sense might otherwise tell us aren't necessarily true. The New York Times reports today that Jared Loughner, the shooter in the Tucson massacre, was known to smoke salvia divinorum, as well as marijuana, according to his friends.

There are several points of interest here. First, off, New York Times, I have a question for you: Really? You're considered the finest newspaper in the world and you jump on board this story?

Second, note the conflation of salvia divinorum (also known as diviner's sage, diviner's mint, and, according to Terence McKenna in a lecture I attended at Starwood some years ago, "Eyes of the Shepherdess") with marijuana. The former is said to cause symptoms of psychosis and hallucinations, the latter, well, can create any number of responses, ranging from dry mouth, bloodshot eyes, craving for snacks, loss of inhibition, a propensity to philosophize, and a desire to play video games, read Ayn Rand, or listen to Pink Floyd.

Salvia divinorum has grown in popularity in recent years, with use among teenagers growing. McKenna never mentioned smoking it; instead he described chewing the fresh leaves. Of course dried herbs are far easier to obtain and distribute, so smoking is the preferred method of ingestion these days, and some day smoking causes a very different effect than using the herbs in the traditional way (the herb has a long history of being chewed by indigenous peoples in South America, according to McKenna).

My third point of interest is this: is this revelation about Loughner's personal habits meant to suggest that smoking salvia was somehow a factor in his own psychosis? In recent days we've learned he may or may not have had an interest in the occult (let's go with "may not have had" since the evidence for this speculation was a makeshift "altar"--or what some of us might call "a pile of junk"--consisting of a couple of half-used novena candles, a plastic skull in a flower plot, some shriveled oranges, and a half-used bag of potting soil), that he was disruptive in his college classes, and that he smoked pot.

Is salvia divinorum any more instrumental in Jared Loughner's psychosis than it is in Miley Cyrus' cuteness? Young Miley was videotaped using a bong and confessed it was salvia divinorum (yes, I keep writing that entire term out because it bothers me when people just refer to it as "salvia" when that word refers to thousands of plant varieties); personally I think she was smoking pot and didn't want to admit using an illegal substance (remember all the tsk-tsking when the Olympic golden boy Michael Phelps was photographed smoking a bong? Oh no! Young athletes with lots of money who go to parties and undergo lots of stress from competition would never do such things!

I'm not sure what is more troubling: the fact that salvia divinorum (admittedly, a drug that may have harmful or detrimental effects on some teens, who seem to want to smoke it for its entertainment value and not its potential for consciousness expansion, which is why McKenna recommended it) is being linked to this senseless, violent shooting, or the fact that the media seems to be looking for something, anything, to blame for this tragedy instead of focusing on finding ways to prevent it from happening again.

Like, f'rinstance, banning extended ammo magazines for 9mm glocks, or banning these weapons altogether (since they're really only designed fro hurting people at close range). Or, let's say, having background checks on weapons and ammunition purchases include a look at the buyer's employment, medical and school records. And maybe, oh, just going out on a limb here, not glorifying violence in everything from video games to hip hop music? How many more times does this have to happen before we realize we all bear some of the responsibility?
Posted by Peg at 5:56 AM