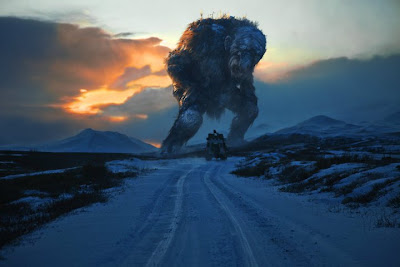 This new film just premiered at Sundance. The now-popular "fake documentary" conceit has been raising the stakes recently, with low-budget minimalism giving way to imaginative special effects that still try to capture the "found footage" mystique that is a cornerstone of this genre. Cloverfield may have started it all (though I personally thought the "monsters" were somewhat overdone); then this year brought us the subversive horror hybrid The Last Exorcism (by Daniel Samm whose previous false docu A Necessary Death was little seen but highly praised), and the clever not-too-distant-future military allegory Monsters by newcomer Gareth Edwards.

Andrew Ovredal's film The Troll Hunter is the first Scandinavian entry to this exciting genre, and if the trailer is any indication, it looks like a wild ride:

Combining horror, folklore and a cheeky take on religious prejudice, The Troll Hunter looks like it will stir things up considerably. Hail, Norway!
Posted by Peg at 5:55 AM