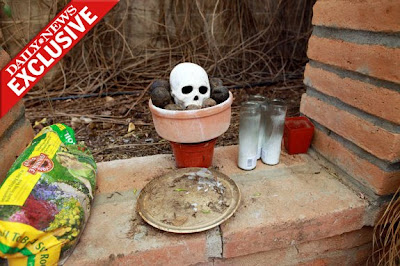 Today's blogosphere is exploding with coverage of the Arizona shootings on Saturday that left a number of people dead and wounded. One intended target was Gabrielle Giffords (still in critical condition), a congressional representative, and federal judge John Roll (deceased). Other victims include one of Giffords' aides, and a nine-year old girl born on September 11, 2001 who had recently been elected to her student council. As rarely happens with such events, the alleged shooter is actually still alive and in custody (though some information indicates he had planned his own endgame as so many mass murdering shooters do these days).

Naturally, there is rife speculation regarding the suspect's motives. Jared Lee Loughner is twenty-two years old, and recent postings on Youtube include ramblings on the worthlessness of U. S. currency (Loughner supports a return to the Gold standard, apparently) and the pervasiveness of poor grammar (though his own spelling isn't always perfect). Some right-wing bloggers are referring to him as a "liberal lunatic" while others think he is just an angry nutjob with no political motivations whatsoever.

But today, the New York Daily News posted an "exclusive" photo reportedly taken in Loughner's backyard, and the accompanying article says the photo depicts a "chilling shrine" linked to the occult. The alleged shrine includes a plastic skull atop a terra cotta pot full of shriveled oranges, a few used seven-day candles, an old ceramic plate, and a half-full bag of potting soil.

Some responses to this story have already appeared on the internet: one USA Today blogger asks if this is a shrine or merely "leftover Hallowe'en decor," and quotes Pagan blogger Star Foster's thoughtful piece detailing the many ways in which this is not an occult-themed group of objects.

Despite no other evidence appearing which links Loughner to any interest or activity in "the occult," the NYDN article claims it has confirmed with "experts" that these objects "are featured in the ceremonies of a number of occult groups." (Other news websites are covering it, most of them using the word "occult" in their headlines, like The UK's Telegraph, and the Canadian version of the article claims the suspect is "obsessed" with the occult even though the article says this possibility is only being investigated.

Foster offers a reasonable summary of these objects, found within a makeshift room with a camouflage nylon scrim: "Well, the four elements (earth, air, water and fire) are featured in occult ceremonies, but then occult ceremonies are mindful things. The nook is dirty and unkempt. The candles are shoved to one side, there's debris and dirt clinging to items (indicating they haven't been used or handled recently or regularly), and there are utilitarian items like plastic pots and potting soil on the "shrine". The so-called "ceremonial" candles are plain white novenas that they sell at the dollar store and are used for both religious and utilitarian purposes. I've both used them on my altar and as emergency lighting in bad weather. The skull and oranges likely have mundane origins as well. It appears to me that someone set a bowl of oranges with decorative skull here from Halloween and forgot about it, just like they set the utilitarian white candles here and potting soil and never gave them a second thought. I don't see a shrine. I see the remnants of summer forgotten in deep winter, like you might see in any backyard."

I've placed oranges (and apples, pomegranates and other fruits) on my altars. And seven-day candles. And probably even a skull or two. And I have a backyard altar that may look mundane by some standards. Here it is: 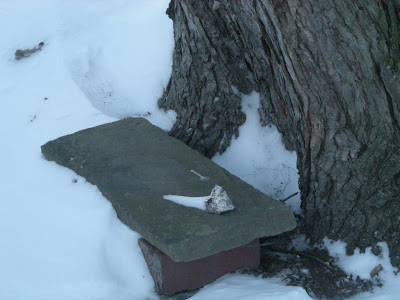 But despite being an avid and professional gardener, I've never put a bag of potting soil on (or anywhere near) my altar. So let's assume this grouping of objects is mundane and not occult-related, for the moment.

But what if it was?

Would Loughner's interest in any aspect of the occult automatically mark him as violent, unbalanced, or evil? Because surely he is all of those things. Piling oranges into a planting pot and topping it with a skull (if in fact he was the one who did this) is simply not a significant enough act to equate it with the desire to kill as many people as possible at a peaceful gathering intended to allow a local public servant to socialize with her constituents.

And yet I have no doubt that many people will try to find some clue to explain Loughner's murderous actions, contained in this random assortment of objects on his patio.

The word "occult" literally means "hidden." It has come to refer generally to the trappings of the Western mystery and magical traditions, encompassing a wide array of beliefs, objects and practices, from astrology and alchemy, to tarot and tea leaf reading, to Wicca and Satanism. In this chapter I wrote for the Contemporary Handbook of Contemporary Paganism, I try to uncover the uncomfortable associations the word has taken on in recent years, and essentially conclude (on page 549) that the similarity of the words "cult" and "occult" became inexorably linked in the cultural mindscape around 1969, after the runaway success of Rosemary's Baby and the tragic murder of director Roman Polanski's pregnant wife Sharon Tate by the Manson Family.

For whatever reason, the word "occult" frightens people, despite its very vague associations and multiple layers of meaning. I'm fairly certain this particular bit of "news" will be debunked and Loughner will not be found to have any significant interest in "the occult." But if he does, will such interests or involvement necessarily be linked to his actions? Will interest in "the occult" be taken as evidence of his guilt?

Remember the Columbine massacre: the teenage killers' interests in video games, and their penchant for wearing black trench coats, led "experts" to speculate their "Goth" dabbling was in part responsible for their actions.

Remember The West Memphis Three: Suspect Damien Echols' interest in Wicca led "experts" (charlatans with mail order degrees) to conclude the horrible murders of three eight year old boys must be "satanic" in origin and the resulting trial was a ludicrous three ring circus of superstitious speculation which, nevertheless, ended with three inocent young men in prison, and one on Death Row.

Many people have many strong feelings about the political implications of this event. And whether we like it or not, politics has become inextricable from religion in this country. And whether we consider what we believe and do in the name of our spirituality to be a "religion" or not, there is still a natural human tendency to want to divide things into categories, to make connections. We want to understand why this happened.

But in the end the answers to "why" may not satisfy us; may even make us sadder and angrier and more confused than we are now. But we must let events unfold and keep our heads. Let's not get all hopped up on speculation and finger-pointing at this or that possible motivation, and instead be thankful that there will be an opportunity to bring this killer to justice and to understand why he felt compelled to do what he did, and to learn how to prevent it from happening again.

I welcome comments to this, but please, try to keep your discussion civil and relevant.
Posted by Peg at 11:52 AM