SEASON OF THE WITCH: A Medieval Muddle 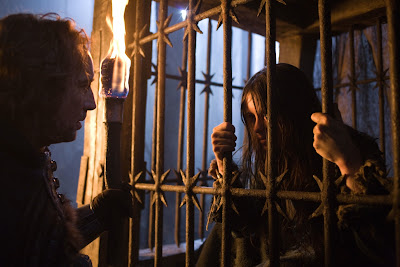 You’d think it was the 1970s all over again, what with so many occult-themed stories in film recently. 2010 brought us The Last Exorcism (a clever, subversive premise that unfortunately dissolves into precious chaos), Devil (a kinda spooky but mostly lame story of random folks trapped in an elevator who just start dying), last year gave us The House of the Devil (a cool cinema verite story of a cult leader), and in just a few weeks The Rite opens (a contemporary story of exorcists-in-training in Rome, based on true events). Later this year: Black Death, about plague victims who won’t stay dead, and from Norwegian director Tommy Wirkola (of last year’s Dead Snow, about Nazi zombies), a comedy-horror mash-up called Hansel and Gretel: Witch Hunters.

Historical thrillers are often framed as commentary on modern problems; the last time a medieval film did this, we had The Navigator: A Medieval Odyssey (1988), which linked the black plague in medieval Britain to AIDS in contemporary Australia. A tiny Scottish village believed it could remain immune from the plague if they climbed the tallest steeple they could find and hung a metal cross on it. The central event and climax is as simple and as thrilling as it could possibly be: but alas, it doesn’t prevent the plague from striking the film’s young hero.

In Season of the Witch, similarly superstitious beliefs surround the plague’s decimation of humanity. But, since we don’t currently have a “plague” that parallels those of ancient times, I’m going to have to conclude that the film’s main sub-commentary has to do with mindless religion-based superstition. Given this last week’s reports of massive deaths of birds and fish all over the globe and the resultant apocalyptic panic-mongering…yeah, I’m gonna go with that.

In the film’s prologue, in 1235, three witches are hung and drowned after confessing to consorting with the devil. The attending priest, troubled when the executioner won’t help him redeem the women’s souls, hauls their bodies from the water and reads incantations over them. But one of them won’t stay dead. Fast forward 100 years, and two Crusade knights, Behmen (Nicolas Cage, whose best work lately is in quirky comedies like Kickass or Bad Lieutenant, Port of Call: New Orleans, is a bit wooden here) and Felson (Ron Perlman, so wonderful in Sons of Anarchy, who seems uncomfortable here), hack and maim their way across the Middle East and Asia Minor. Disillusioned and haunted by their unwitting murder of women and children, they desert their holy army, only to be recognized in a remote village that has been ravaged by the plague. They’re captured and thrown in a dungeon.

A priest named Debelzaq (Stephen Campbell Moore) recognizes Behmen’s crest on his sword hilt and brings the two knights to the bishop (Christopher Lee, in a nice little cameo). Disfigured and dying, the cleric insists Behmen and Felson escort an accused witch to a remote abbey, where the monks possess an ancient book containing rituals that will purge the witch of evil and, presumably, remove the plague from the land. (How one woman could cause a disease that killed millions of people is not explained.)

Annoyed to be serving the church yet again, Behmen and Felson agree to the task, but under the condition that the witch be given a fair trial. They set off, accompanied by Debelzaq, Eckhart, a knight named Eckhart (Danish heartthrob Ulrich Thomsen) whose family has been killed by plague, Kay, an altar boy who wants to be a knight (Red Riding’s Robert Sheehan), and an imprisoned swindler who agrees to be their tracker (Stephen Graham, an English actor who nevertheless speaks with a New York accent).

The witch (Claire Foy) is young, pretty, and devious. Behmen sympathizes with her, but as his compatriots begin to fall prey to accidents, he understands she is more dangerous than she looks. I don’t want to give too much away, but suffice it to say, by the time the party reaches the abbey, all hell breaks loose…literally.

And therein lies the worst thing about this movie: the ludicrous special effects and the needless reliance on supernatural silliness. Shot on location in Budapest, Hungary and Salzberg, Austria by cinematographer Amir Mokri (Vantage Point) and with terrific costumes by Carlo Poggioli (whose credits include The Mists of Avalon and The Brothers Grimm), this is not a bad-looking film. But the story is a mess: disjointed, illogical and ultimately a poor exploration of a terrifically momentous time in human history. Millions of people were dying, and didn’t know why, and they looked to the Church to save them, and it didn’t.

Just once, I’d love to see a film that has as its premise a pervasive cultural belief in occult powers…but that portrays these beliefs as being difficult, if not impossible. to defend when confronted with the facts. In this way, such a film is not about whether magic or witchcraft are "real" or not; but instead is about the fascinating psychological implications of belief in such matters.

I’m not saying paranormal events don’t occur, or that evil doesn’t exist. But in truth, it is the belief in the human capability for evil, the human propensity for evil, and the fear of being victimized by that evil, that propels the main witch hunts of history. How refreshing it would be to see an historical film that confronts this fear and this pervasive delusion in a grounded and plausible manner.

But instead, we want our witches to shoot lightning bolts from their hands. We want wolves skulking in the forest to grow huge lantern jaws and glowing red eyes (hello? Slobbering wolves in the dark aren’t already scary?), and we want winged demons to croak curses from their shriveled walnut heads and break our spines like jackstraws. Gods help us, we want so badly for there to be a zombie apocalypse that there are days when we can think of little else. We want for there to be evil we can’t defeat, horrors we can’t escape.

Why this is, I can’t say. But, I fear our current social climate, cynical and apathetic though it may be, is moving inexorably backward in time to the fearful, superstitious days of our medieval forebears, hiding in the shadows from a perceived punishment, stinking and starving and praying, instead of walking into the sun and meeting their mortality head on with a smile….and maybe a broadsword. 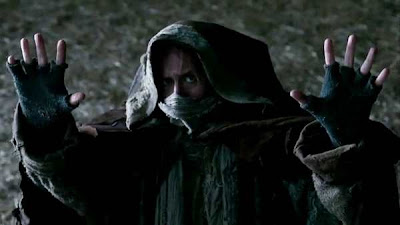